Prestressed concrete is a high-strength, engineered building material used extensively in the construction industry. It has a multitude of applications, including in bridges, commercial buildings, dams, roads, stadiums, hospitals, parking garages, multistory residential buildings and in a number of other structures. The applications for this construction material are nearly limitless. It’s a great way to minimize cracking and take advantage of the incredible strength of reinforced concrete.

So, what exactly is prestressed concrete? 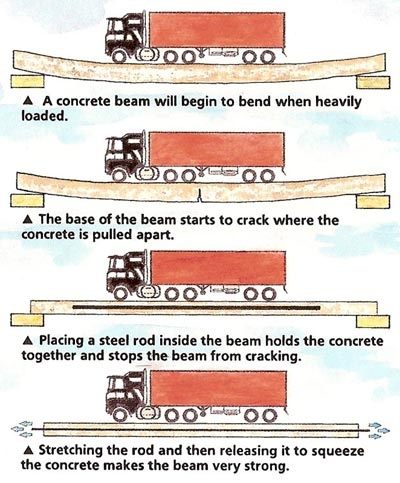 The prestressing steel helps the concrete gain strength in tension by adding additional “pushing” force on the concrete after it has hardened. A traditional analogy often used to explain the concept of prestressing is to stack books side by side and place pressure on both ends with one’s hands. The pressure exerted on the books develops so much strength that the books could be lifted as a single unit and could also support great loads on top without falling apart. The very same concept is realized with prestressed concrete products. The photo below shows the concept with the books. 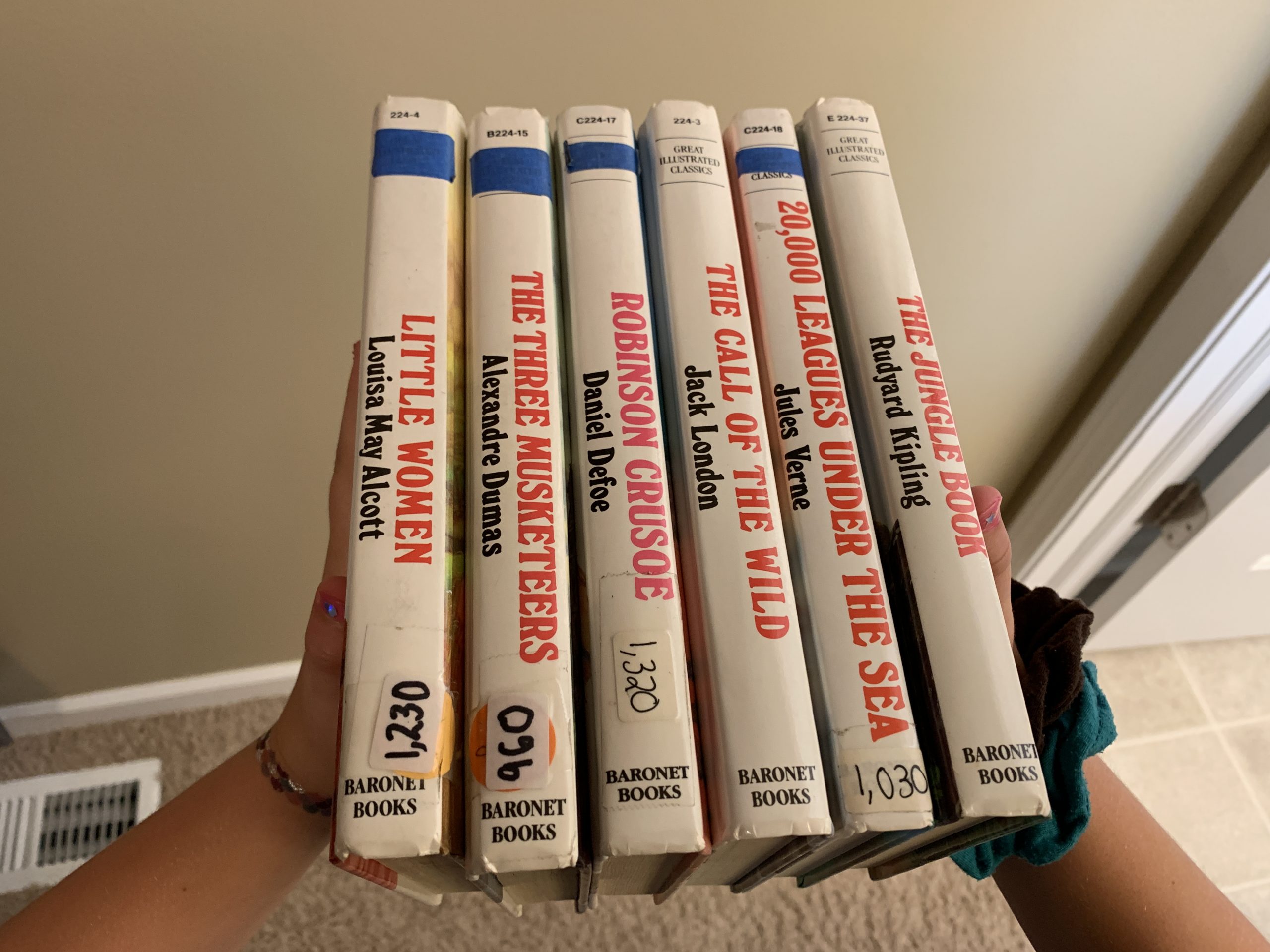 There are two types of prestressing. The first is called pretensioned and the second is called post-tensioned. Pretensioned concrete is when the high strength steel tendons are stressed (pulled or stretched) before the concrete is cast. Part (a) in the diagram below shows an initial casting bed setup. It has two end abutments that anchor the prestressing steel cable that is pulled the entire length of the bed. Part (b) shows the casting bed after the concrete has been cast into the form, covering the prestressing steel cables. Part (c) shows the transfer of force from the tensioned steel cable to the hardened concrete. This is what gives a prestressed concrete beam its strength. 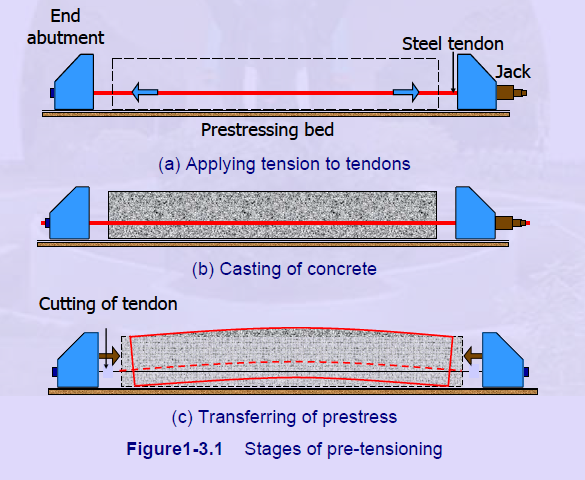 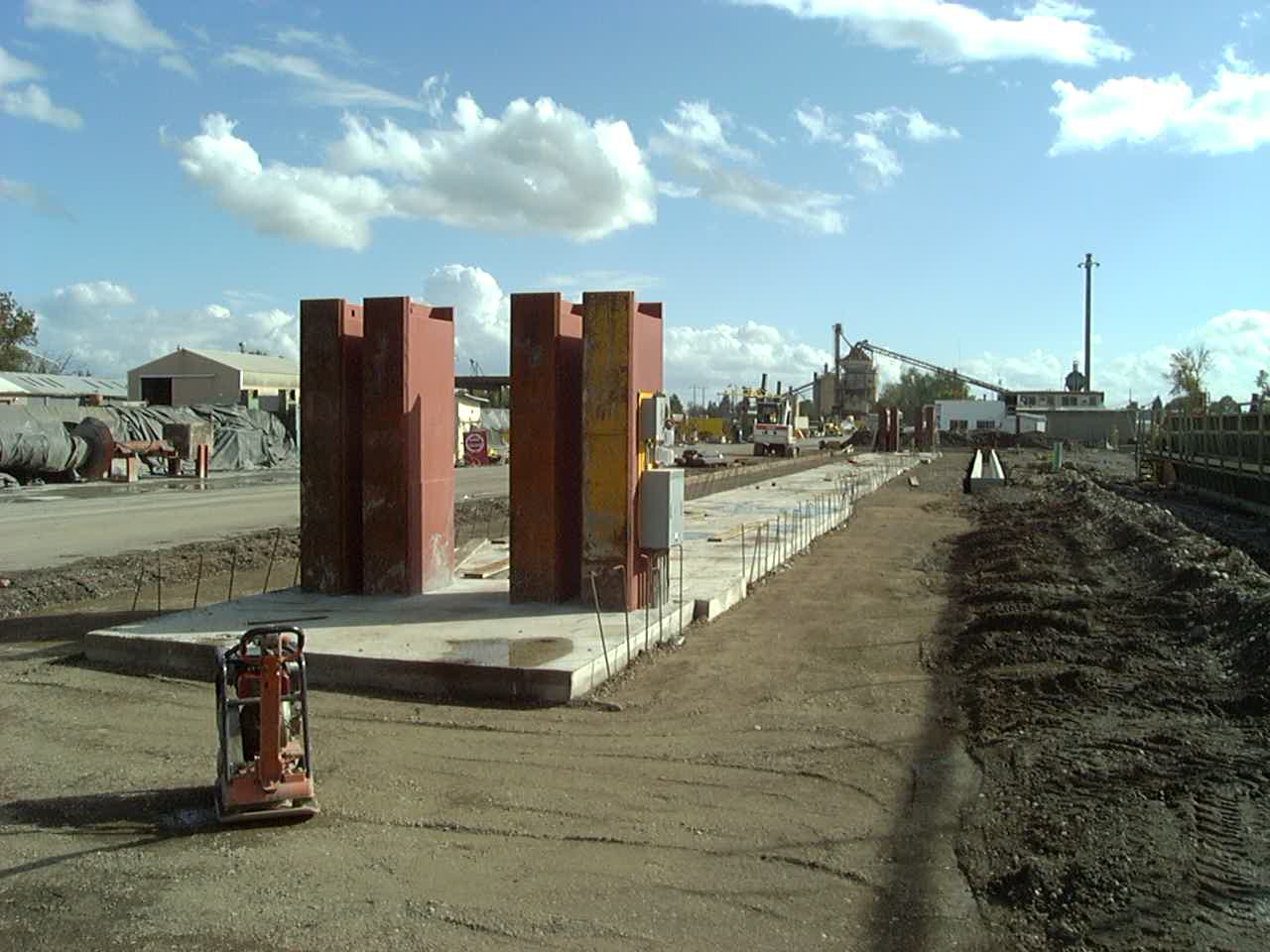 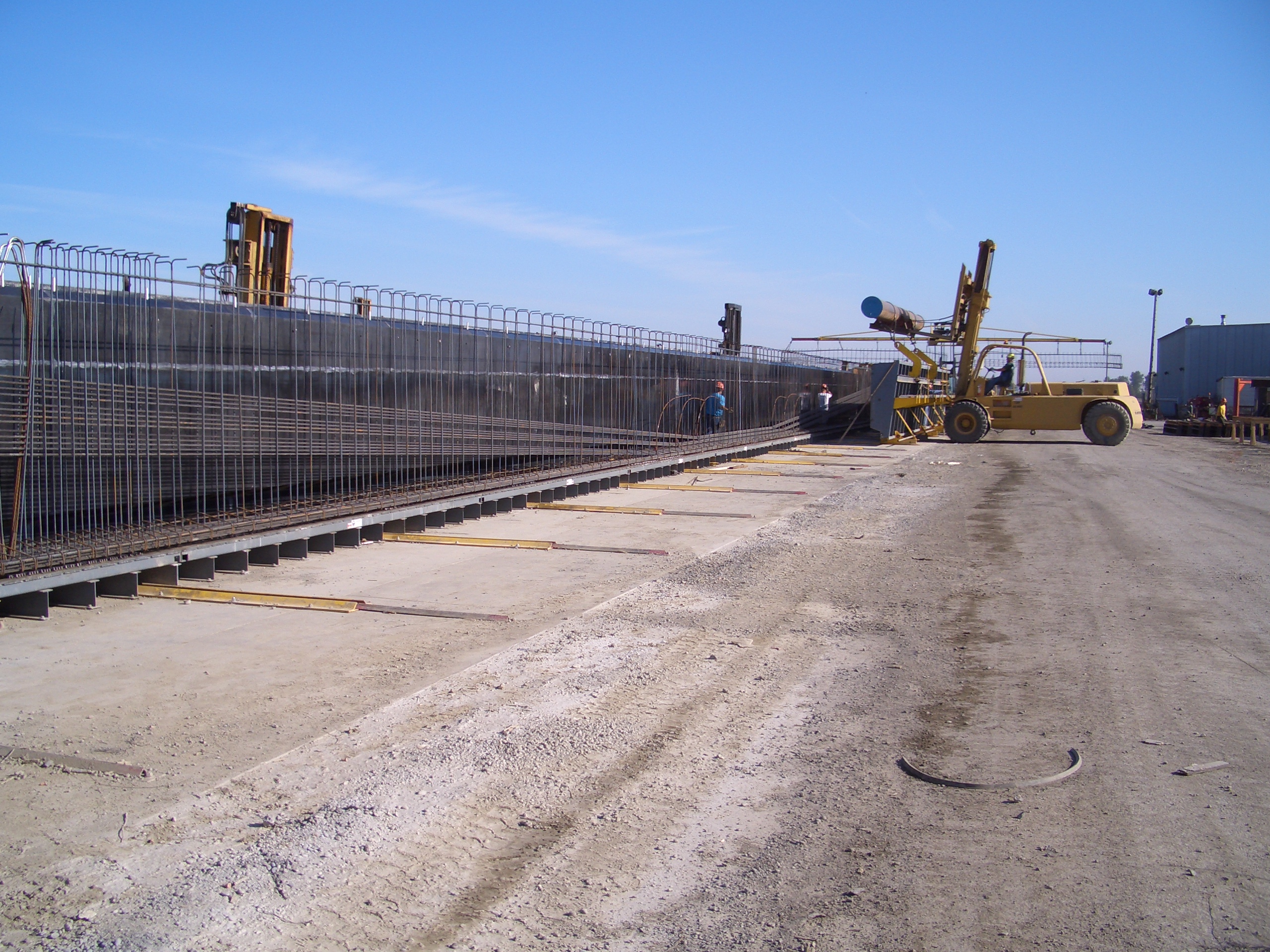 Post-tensioned concrete is when the concrete is cast and hardens, and then the high strength steel cables are stressed. Hollow tubes called ducts are used to reserve space for the high strength steel cables after the concrete has been cast. Part (a) in the diagram below shows a concrete beam having been cast on a casting bed. The duct can be seen running the full length of the beam. Part (b) shows the prestressing steel cables being pulled in the beam. Rather than anchoring the strands to casting bed abutments, they are anchored to the hardened beam itself. A hydraulic jack is used to give the cables their strength. Part (c) shows the transfer of force from the hydraulic jack to the hardened concrete, with both ends of the prestressing steel cables now anchored to the beam. 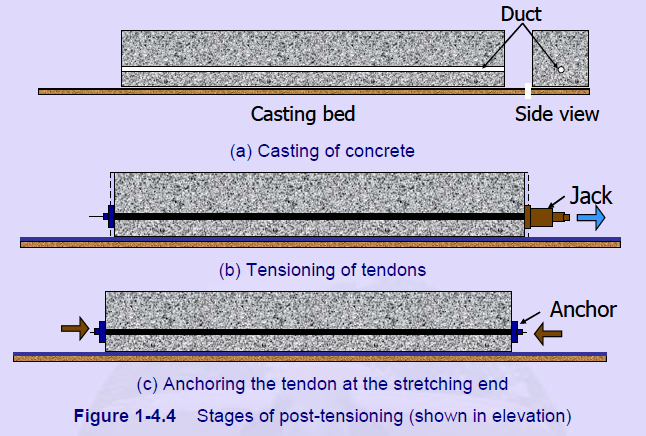 The photo below shows the fabrication of a post-tensioned beam. The ducts can be seen running through the reinforcing cage. 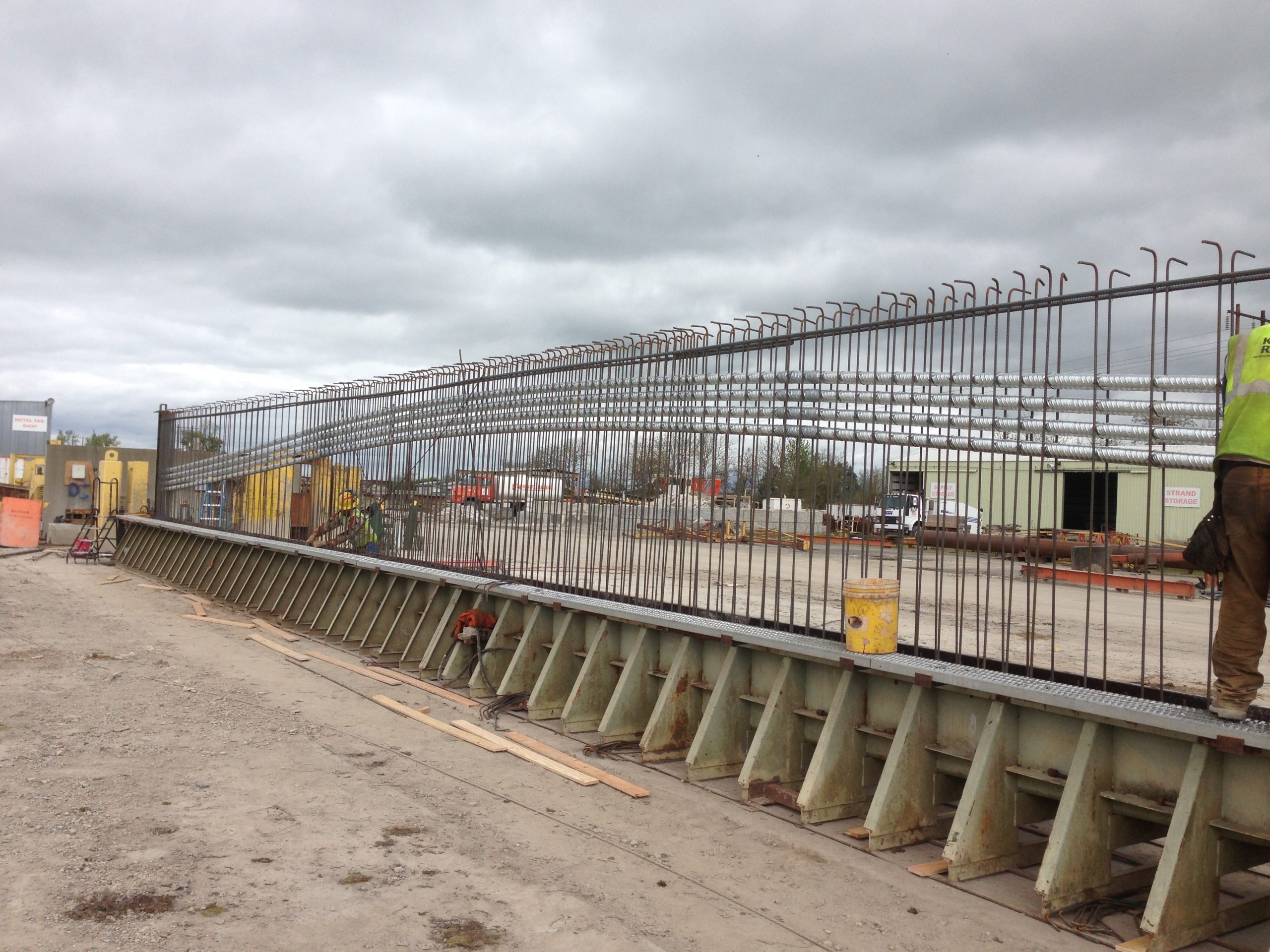 The photo below shows the fabricated beams from the photo above with post-tensioning ducts.

The photo below shows a typical splice of post-tensioning ducts between two beams that join at a splice point. 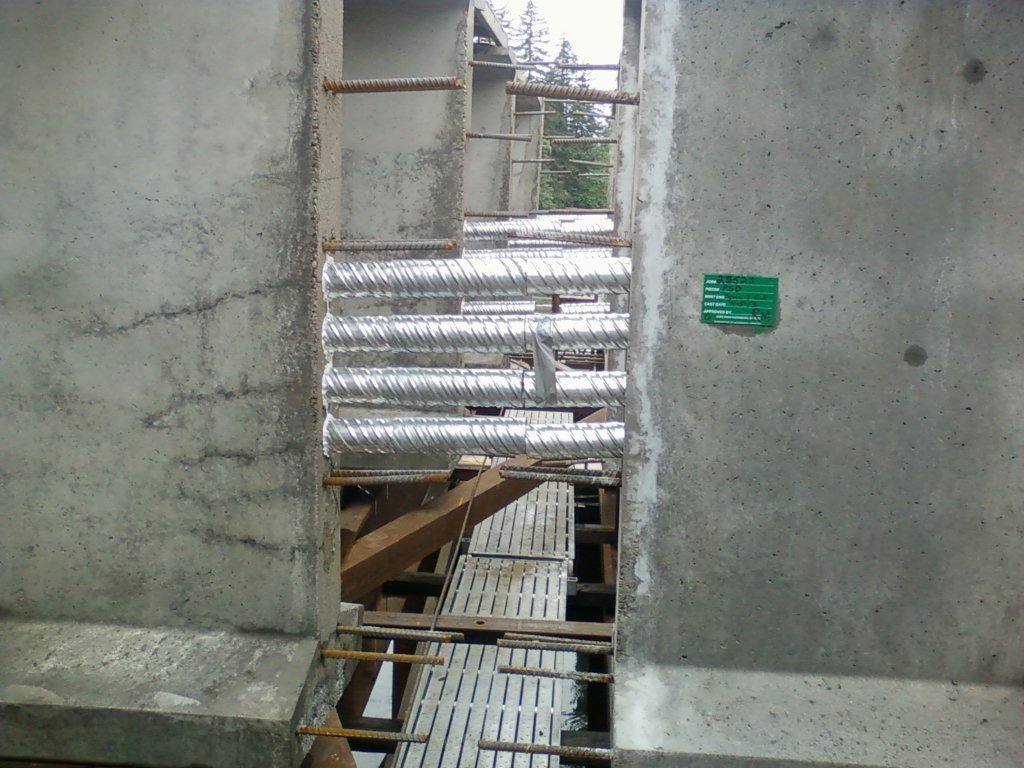 The photo below shows a high-strength hydraulic tensioning ram that is used to stress (pull or stretch) the prestressing strands that have been pulled through the hollow ducts. 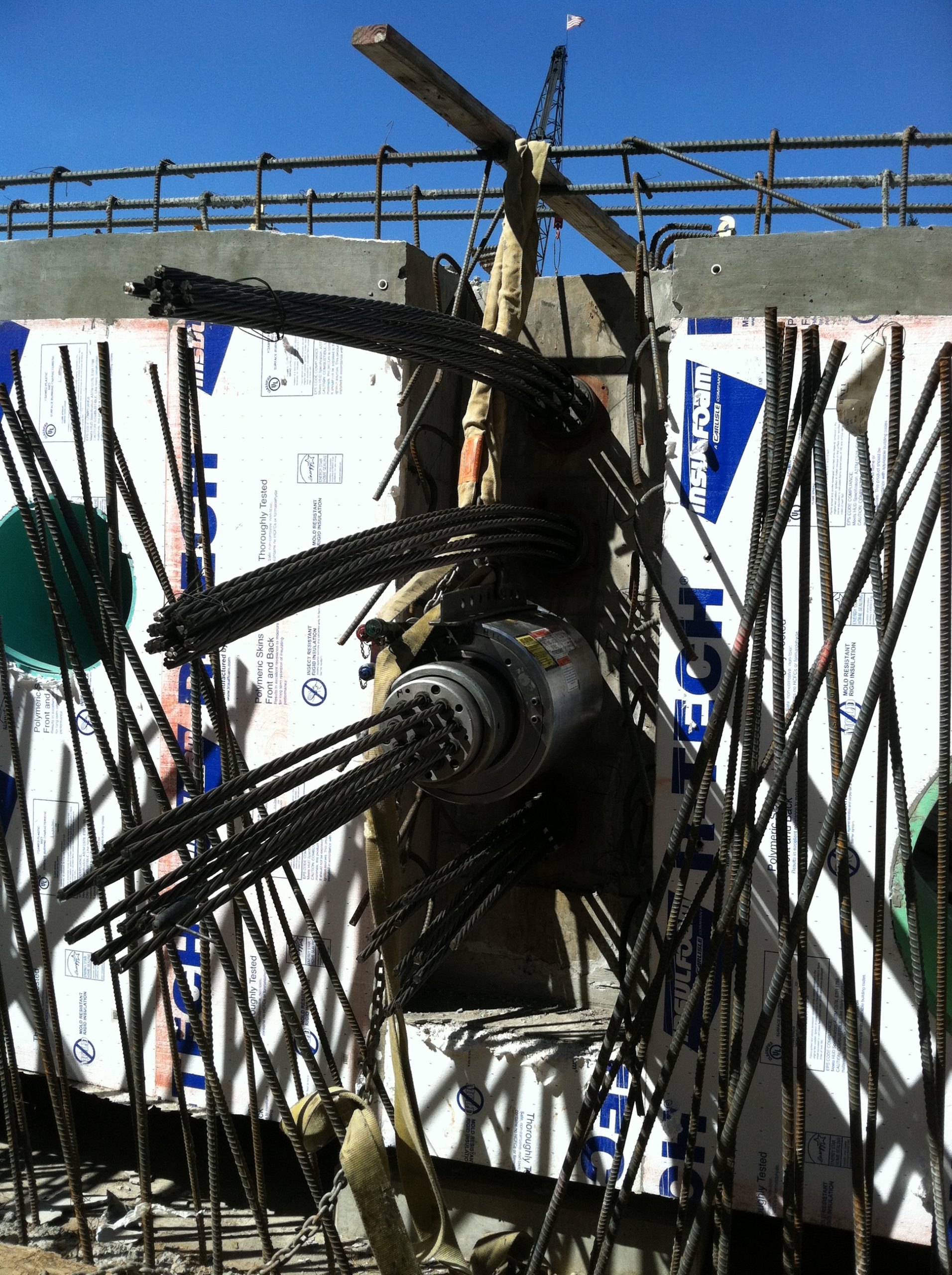 There are a number of advantages of using prestressed concrete. Some of these advantages include the following:

Prestressed concrete has endless uses. If you can dream it, you can prestress it!